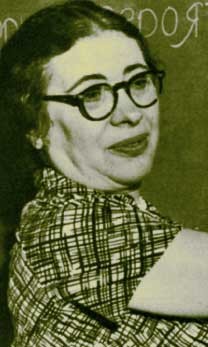 Ida Rhodes is considered one of the UNIVAC 1 pioneers. She helped develop the C-10 language, used in programming the UNIVAC 1 for the census bureau, and is also well known for her groundbreaking work on computer translations of natural languages.

Ida Rhodes moved to the US when she was 13 from a small Jewish village in the Ukraine. She excelled in her studies of mathematics at Cornell University, and held many positions in nursing, teaching, and business before joining the National Bureau of Standards in 1940. She was moved to the National Applied Mathematics Machine Development Lab, where she worked on developing the C-10 language, used to program the UNIVAC 1. She was also among the first to begin work on computer translations of natural languages.

Born Hadassah Itzkowitz, in 1900, Ida grew up in a small Jewish village in Ukraine, southwest of Kiev. Her family moved to the US in 1913, where she changed her name to Ida Rhodes.

She attended Cornell University with two scholarships, where she received both her bachelors and masters in mathematics in 1923. She was elected into the Phi Beta Kappa in 1922, and the Phi Kappa Phi in 1923, both renowned academic honour societies. In addition to mathematics, she was heavily involved with nursing in her afternoons. For this, professors were often known to change their lecture schedules so she could attend their classes. As a nurse’s aide at Ithaca City Hospital, she performed delivery room duties and all post-natal care tasks related to mothers and their children.

After her graduation, she continued to work as a nurse’s aide until 1926. She spent the next few years working in various jobs involving mathematics - as a high school teacher, in merchandise control, and as an accountant. During this period, in 1931, she attended graduate school at Colombia to further pursue mathematics.

In 1940, she joined the Maths Tables Project (MTP) under the US National Bureau of Standards. The project was to prepare exponential and circular functions tables, and to solve scientific problems for the governmental use. The initial project group were well educated in theoretical mathematics, although the work required numerical analysis. Nevertheless, the MTP became well known worldwide for its precision and accuracy in producing tables. During this period, Ida worked to prepare the Handbook of Mathematical Functions for the NBS’ Applied Mathematics Series as a planner and supervisor.

In 1947, Ida took a trip to the NBS in Washington. She left such an impression on the team there that she was invited to return to DC to work on their project developing automatic electronic digital computers. Ida worked for the bureau at the National Applied Mathematics Laboratories (NAML) as a consultant, providing consultation and advice for governments and industries about the applications and helpfulness of computer technology.

While stationed at the NAML Machine Development Lab (MDL), she also became a systems programmer and pioneering programming numerical analyst. She worked alongside Grace Hopper for a brief time, and contributed to the development of the UNIVAC 1 and SEAC machines. One of her defining contributions was in the design of the C-10 language with Betty Holberton in the early 1950s, applied to the UNIVAC 1 computer for the census bureau, and for designing and programming the computer used for the original Social Security Administration. She was recognised as a UNIVAC 1 ‘pioneer’ much later, at the National computer conference in 1981.

She is also recognised for her contribution to computer translations of natural languages – mainly from her native Russian to English. She was one of the first to appreciate the importance of sentence parsing, breaking sentences into key components, as well as separating words into prefixes or suffixes, and their roots. This, applied to natural language processing for computers, continues as an area in developing artificial intelligence.

In 1964, Ida retired from the NBS. However, she continued to work as a consultant for the Applied Mathematics Division until 1971, giving presentations and lectures. Ida additionally taught coding, and held classes specifically to help deaf, mute and blind students learn computer coding.

In 1949, she was awarded the Exceptional Service Gold Medal by the Department of commerce, for "significant pioneering leadership and outstanding contributions to the scientific progress of the nation in the functional design and application of electronic digital computing equipment." The department later gave her a Certificate of Appreciation in 1976, "on the occasion of the 25th anniversary of Univac I in recognition of [her] services to the Information Revolution."